Posted by David Safin on Tue, Jul 9, 2013 @ 09:07 AM
In April, I wrote a blog about Eddie Coughlan of the Baltimore Ravens, who came and spoke to a group my Communication students.

His visit was the subject of a feature in our most recent magazine.

The following is posted with permission of the editor of our magazine and was written by Simon Stuchlik.

Saint Vincent College may be known as the summer home of the Pittsburgh Steelers, but it also set the groundwork for a member of one of the Steelers’ fiercest rivals. Eddie Coughlan, C 08, spent four years learning and refining his video capabilities as a student at Saint Vincent before joining the Baltimore Ravens as a production coordinator after his senior year. On April 12, he was back on campus to talk to David Safin’s Field Production video class about his path to being on the sidelines during Baltimore’s Super Bowl win this February.

Coughlan, who was offered the job upon completing an internship with the Ravens, stressed that it takes hard work and dedication to excel in a career in video. “You have to love what you do,” he told the students. “In this field, only people that want to make themselves better at all times and constantly look to gain experience can truly shine.” Two Emmy awards from the National Capital Chesapeake Bay Chapter of the National Academy of Television Arts and Sciences, won for features he produced for the Ravens’ broadcasting department RaveTV, reveal his dedication.

But beyond the determination to get better, Coughlan acknowledged that his college experience laid an important foundation for his success. He credits two people in particular. “Dave Safin gave me the tools and vision to do what I do,” he said, “while (sports information director) Jeff Zidek gave me the opportunity to execute them.” Working as a student for Zidek allowed him to gain experience in videotaping sports games, which he calls “invaluable” for excelling in his career. 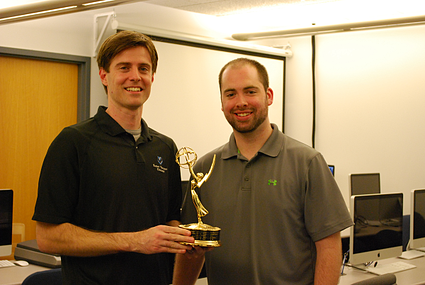 Coughlan’s work, which consists of seven-day work weeks with 12-14 hour days during the NFL season, is not always glamorous, but the rewards are fulfilling. Responsible for shooting sideline footage during games and a member of the broadcast team that produces, shoots and edits five TV shows per week, Coughlan interacts with players and coaches on a regular basis. He travels all over the country. And in June, he will receive a Super Bowl ring with his name on it.

(Bloggers note: He got his ring. I saw a photo, and it was impressive. Eddie also visited the White House.)

Telling Ravens stories to a roomful of Steelers fans may be a difficult task, but the students walked away with a deeper understanding of how classes and internships contribute to a successful career. “It was great to get a perspective about where to go in life after college and how to get there,” Eric Arbore, a senior multimedia student, said. “It really made me hopeful for my personal future."

See what else was in the magazine by clicking below.