I Left My Heart in Ling’An

This past weekend, I was finally able to escape the city and get my first glimpse of “real China.” As beautiful as Shanghai is, I was a little bit sick of the constant noise and shoving and rude behaviors. I threw caution to the wind and decided to sign up for a weekend hiking trip to Ling’An, which is in Zhejiang Province, southwest of Shanghai.

It’s about a four and a half hour drive by bus, and we left in the evening. Three hours passed by, and I really started sweating it. I had signed up for a mountain summit hiking trip—and there were still skyscrapers and neon lights and English translations everywhere. I was tired of looking out of the window and was almost about to doze off when I saw a huge black shape rise out of nowhere and then disappear. Then, another one appeared, and I realized that these were extremely oddly-shaped mountains, rising up in between commercial districts. The mountain ridges continued to multiply until they outnumbered the buildings, but we were still on a major highway, travelling through huge cities.

We finally turned off of the highway and drove through a large, modernized town until we took a small side road. The asphalt road turned into a one-lane road, and then a gravel road, and then a dirt road; we were in for a hair-raising, twisting drive straight up into the mountains. Even the small van had difficulty making it through some of the turns. It was nearly midnight, and the fog had settled in, so we only got glimpses of tall stone cliffs and mysterious mountain ridges.

When we arrived at the guesthouse about half an hour later, we were exhausted and ready for bed. 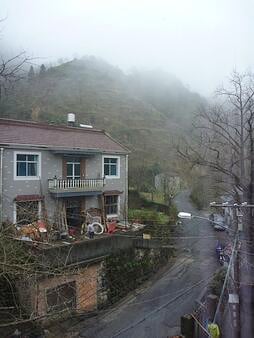 The guesthouse was extremely luxurious according to the Chinese standards I’ve adopted. We had hot water (no shower, though), beds, and electricity. We had a heater as well, and when I went to go and turn it on, I saw the largest spider I’ve ever seen outside of a zoo or a pet shop. It was about three inches across and was just chilling on the wall next to the heater. Eeva, my roommate, tried to knock it off the wall and trap it in the trashcan, but it lost some legs in the process and she had to kill it with a shoe. I was watching and providing emotional support the whole time—it was quite terrifying.

After the bug fiasco, we settled in for a good night’s rest. I was woken up in the morning by a very odd ringtone: a horse neighing. At first, I genuinely thought it was Eeva’s alarm, but when hers went off, I realized that there was an actual horse right outside our window. On the left is the morning view from the guesthouse:

Our group ate breakfast and set out for the hike. Our plan was to reach three summits, all about 5200ft. Starting out, we hiked through the village and then started up the mountain on a stone step path. 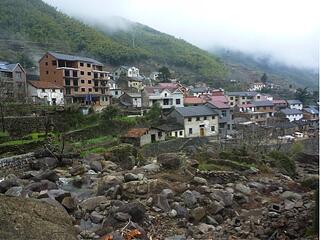 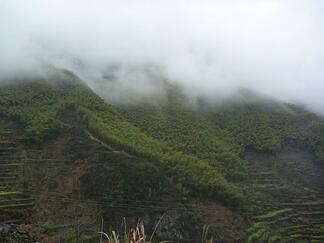 This is where the major issue started. I had been coughing for almost two weeks at this point, and I was still having some trouble recovering. I supposed that the fresh air and exercise would help me get over my cold. On the hike, though, whenever I tried to take a deep breath, I would have a coughing fit and then lose my breath. Within half an hour, I knew I couldn’t continue. One of our guides had to take me back to the guesthouse, and the rest of the hikers continued on without me.

At this point, I was in extremely low spirits. I love hiking, and I’ve never been unable to finish a trek. I was angry at myself and my lungs and all of the people who told me that I should’ve gone to the doctor a week ago. The Chinese guide who took me back, though, was so kind. Her English name was “Twelve.” (Chinese-English names are often very unique—I’ve also met a Bumblebee and an Echo.) She took me to some paths and we hiked up a hill to a bamboo forest. We didn’t see any pandas, so I decided to pretend that I was one: 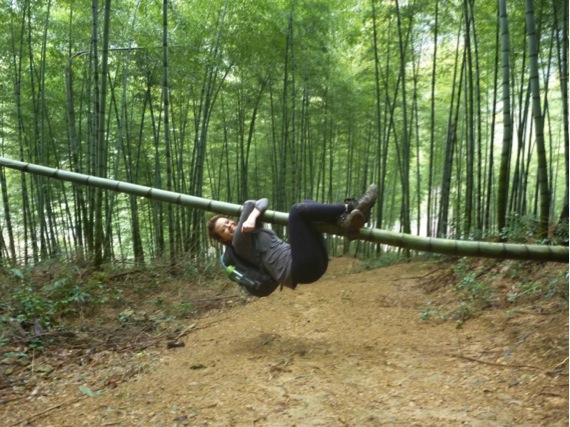 We went back to the village for lunch, and the sun was shining. The fog had cleared, and the mountains were incredibly stunning. It was such a clear, peaceful, beautiful place. 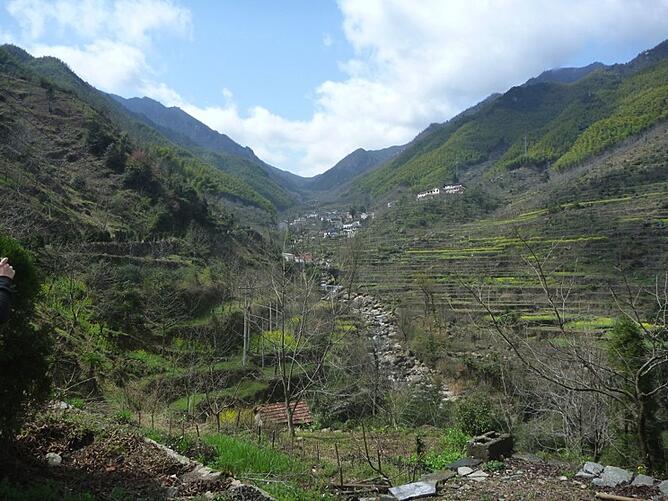 The skies were bright blue, vibrant yellow flowers grew in huge patches in the valley and on the mountains, and walnut trees were just starting to bud. No matter where you were in the village, you could hear the rushing water of the river and the many mountain streams that fed into it. I forgot about all of Shanghai’s dirt and pollution and rudeness, and I wanted to just stay in the valley forever.

Actually, I ended up leaving the valley within two hours. While we were eating lunch, a Chinese couple joined us. We had a great time; I got to practice my limited Chinese and they got to practice their limited English, although Twelve had to translate most of the conversation. Tōng and her husband ended up inviting me to their home for the afternoon, so Twelve and I got in their car and drove an hour and a half with them to their home. I met Tōng ‘s mother, younger sister, and son, and then we all ate a huge dinner. 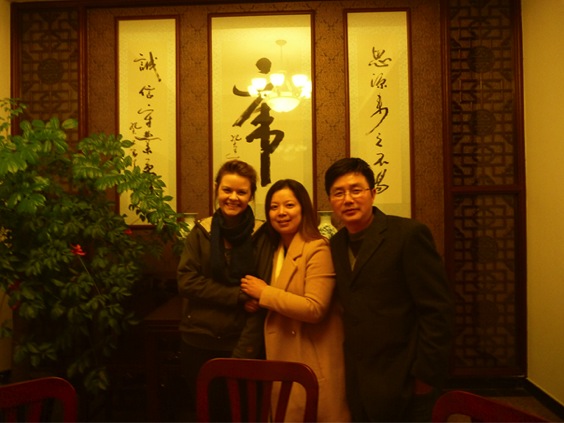 That evening, we had to go back to the village, and we got there just in time to join the others at the bonfire. The night sky was filled with stars. It was the perfect ending to a perfect, if unexpected, day.

The next morning, my cold was even worse, and I was miserable and unable to do any hiking. We left in the afternoon and travelled back to Shanghai. I’ve been home for over 24 hours now, but I am still missing the countryside. I never could have predicted the things that happened this weekend. I didn’t reach any mountain summits, but I met a wonderful family and spent the day with a very talented guide. I got to see the bamboo forest and take beautiful pictures of the mountains. I got to walk through fields of flowers and eat delicious fresh foods. I had to say goodbye to Ling’An, but it won’t be for the last time. This is the first of my many adventures outside of Shanghai! 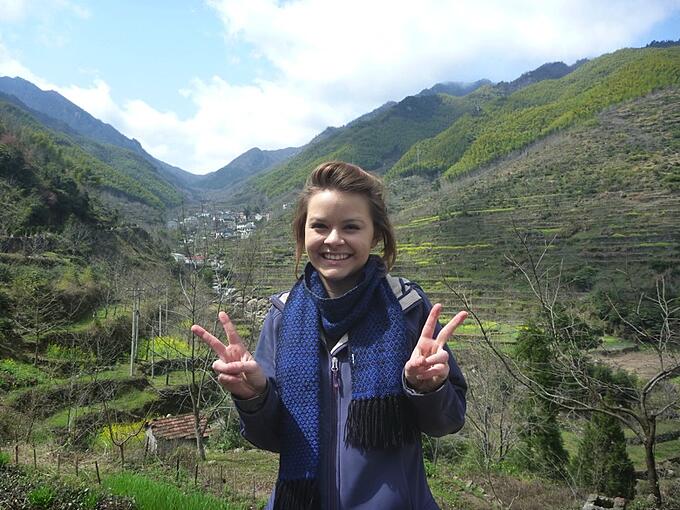 Note: In China, it is a cultural insult to refuse an invitation to a stranger’s home, because you honor them by being a guest. In America, this is a great way to get kidnapped. Please don’t try this at home.