It’s been a while since my last post, and a lot has happened. I’ve started classes and plan to start my internship with Westinghouse next week. I’ve done quite a bit of sightseeing around the city.

Finally, about three days ago… I got sick. I’m currently bundled up in a coat and scarf in the lobby of my dorm, because the internet isn’t working in my room, and I have a lot of things to do before I take a nap this afternoon.

In the next few weeks, you’ll get to hear about my classes and sightseeing trips and other fun experiences. This post, though, will be about one of the most relevant travel topics: culture shock in Shanghai. I was warned about culture shock before I left for China. The culture here in Shanghai is different, to be sure—but nothing quite prepared me for the odd things I experience every day. Here are five things that I never would have expected:

2. Rules are for wimps, especially when those rules involve designated smoking, spitting, and bathroom areas. You will see everything in an average Shanghai street, and I mean EVERYTHING. On the third day here, John and I were walking down the market street near our dorm, and we saw a man air-blow his snot across the street while riding his bicycle. Let me just repeat that: he blew his nose. In mid-air. While steering a bike with one hand. It was weird.

I don’t have a picture of this incident, just to let you know. I do have this: 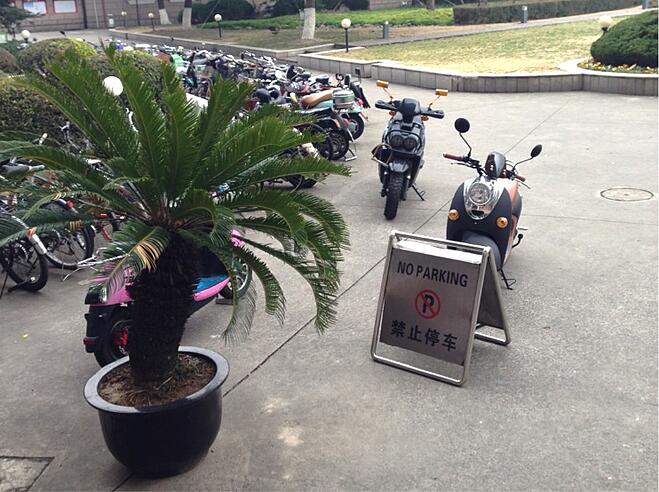 3. Going to the grocery store is a whole adventure on its own. It’s okay, though; if you are feeling homesick, you can just pick up a box of Oreos or a bag of Lays potato chips. Those should be normal—right? 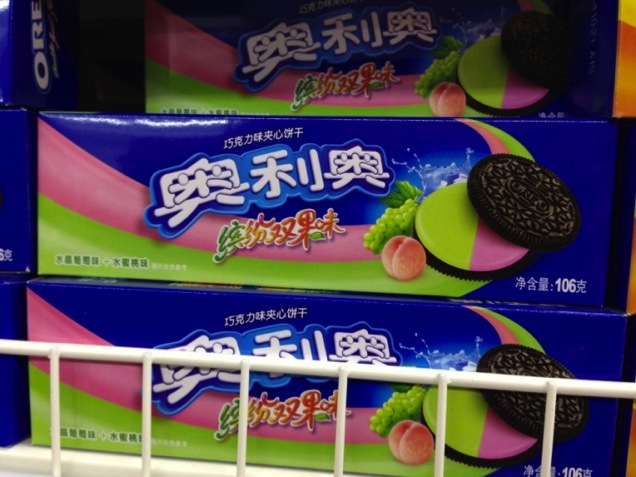 Guess not. I didn’t buy the peach and grape-flavored Oreos. I didn’t buy the “Italian Red Meat Flavored” Lays potato chips, either. If you are reading this from the United States, please think of me and treasure your snack foods while you can, because if you travel to China, there’s no knowing what you’ll get. 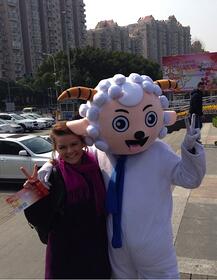 4. Chinese people really seem to like their cartoon animals. Some of the things I’ve seen are incredibly disturbing. If you thought Barney and Teletubbies were scary, think again. As if that wasn’t bad enough—it’s the Year of the Ram/Sheep, and everything is sheep-themed.

The questions I get are interesting too: why aren’t you fat? Why don’t you have blonde hair? Why are you so tall? (I’m only 5’3”). I don’t think I had many expectations about China before I got here, but the Chinese definitely have expectations about America, both good and bad. Some people that I’ve met want to move to the United States as soon as they save up enough money. Others don’t have a very high opinion about our country, as shown by a graffiti drawing that John and I found on a wall in Qibao: 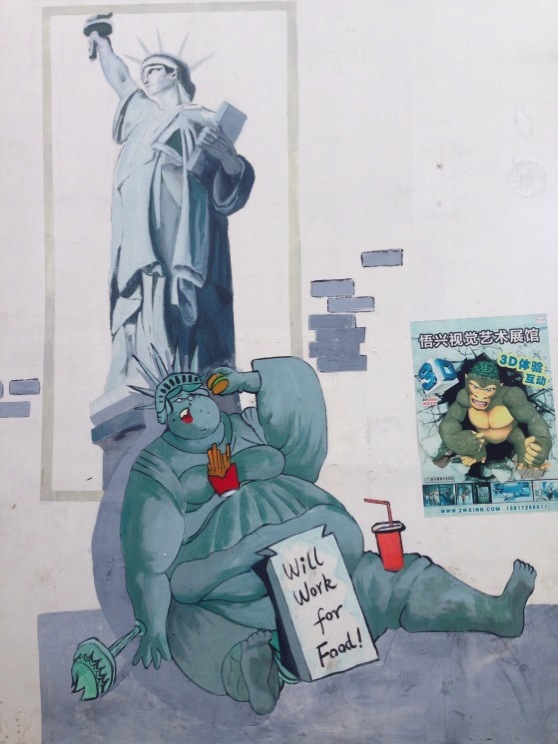 Overall, though, it’s been a wonderful experience so far, and I can’t wait for my next adventure. I plan to escape the city sometime soon and visit a slightly quieter environment for a day or two. Living in a city of thirty million people is exciting, to be sure, but I do miss the outdoor beauty of the Laurel Highlands and Saint Vincent College.

I will be recovering from this cold for the next few days, and hopefully I’ll be able to share some more of my experiences soon. Zaijian!