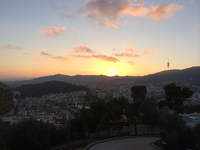 I may be coming off as repetitive by saying this past week was the best week of my life, but it absolutely was. But I won't start there. First off, the weekend of the 7th and 8th of March I went to Barcelona, Spain for the famous Abroadfest. Unfortunately, I was unable to get into Abroadfest because I wasn't wearing the "proper shoes," but Barcelona was still amazing. The city is humongous and the scenery right by the ocean was jaw breaking. We got to go all the way up to the top of a hill which overlooked all of Barcelona, including the famous Barcelona soccer stadium. We got to see famous tourist attractions such as the Sagrada Familia which is the largest cathedral I have ever seen. It began construction in 1882 and still to this day has not been completed. Other famous attractions we got to see were the Barcelona Cathedral, Parc de la Ciutadella, Placa d'Espanya, Torre Agbar, and the Arc de Triomf. All in all it was an amazing trip and definitely worth seeing.

The next weekend we stayed in Florence, which was nice. We got to relax at the apartment and hang out with friends that are a part of the same program as us. It was a nice little break from everything and was just what I needed to prepare myself for the next weekend. The next weekend and week was spring break! My 3 roommates and I booked a trip through a company that is well known around here called Bus2Alps. We booked the Greek Island Hopping Trip which entailed ferry fees, bus fees, a room to stay in, and great tour guides that were so much fun. 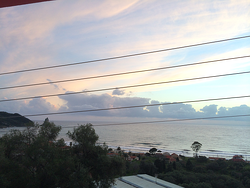 We left Friday morning at 7 a.m. and took a bus to Ancona, Italy where we then got onto an enormous cruise ship. The ship is mainly used to transport trucks to and from Italy and Greece, so it was basically the cheapest way to get to Greece. However, we took that cruise ship to Corfu, Greece! Corfu is known for the famous Pink Palace Hotel. It's widely known around the world to go there for spring break. When we got there, we situated everything and got our amazing room. The room overlooked the ocean and island.

The first night we were there was an awesome time. Everyone went to the dinner that was complementary and ended up being the place everyone stayed at to dance. However, the best time was the next night, when the Pink Palace threw a TOGA PARTY! I personally can't say I have ever been to a toga party, but it is my new favorite type of party. They rented togas out to everyone for 10 euros and of course, every person's toga was pink. 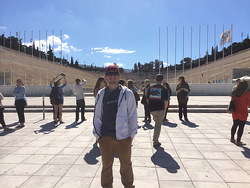 We got into Athens around 3 a.m. and went to nap for a couple hours, until we woke up and took the complementary tour of the city. We timed it perfectly, because the day we ended up taking the tour was Greece's Independence Day. We got to see a parade of tanks, soldiers, policemen, helicopters, jets, and all that cool stuff. Nevertheless, the best thing that we got to see was the Panathenaic Stadium. The stadium hosted the first modern Olympic Games in 1896. It was really cool to hear about the history of the stadium.

The next place we went to after that was Areopagus - the place where St. Paul preached to Athens about Christianity, which is known as the Areopagus sermon. There was a beautiful view from there, where we could see the Parthenon, Mount Lycabettus, Temple of Zeus, and the Temple of Hephaestus. 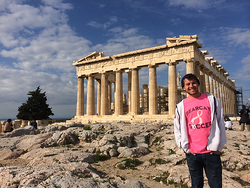 The tour was amazing and we were able to see just about everything except for the Acropolis, which we went and saw the next day. We went on our own and since we had our student ID's we were able to get in for free. The Acropolis is an ancient citadel above the city of Athens and contains remains of several ancient buildings of great architectural and historic significance.

The sightseeing was great, but what was even better were the rooftop bars that they had! Both nights, we went to a rooftop bar that was all lit up with a bunch of people there hanging out with a great view of the city. It was definitely one of my top 5 bars.

The next day we left for my favorite city in Greece, Santorini! Santorini was breath-taking. We got there around 5 p.m. and the sunset was around 6:30, so the Bus2Alps tour guides took us to a spot where you can have a great view and take plenty of pictures. We went there and then went to get some amazing Greece seafood. I got some of the best mussels I have ever eaten. Santorini only has 2 bars on the island and our hostel was right next to both of them, so we ended up going to both of those bars for the night and had the time of our lives staying up until 4:30 - talking to Santorini locals and hanging out with everyone. 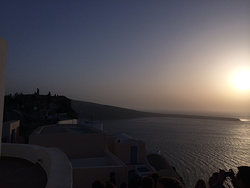 The next day, we took a tour with Bus2Alps who took us to the Red Beach and Black Beach. We stayed at the Red Beach for about an hour where we got to go swimming and lay out on the "sand". After that, we went to the Black Beach where we stayed for about 3 hours. The Black Beach is where everything hit me. Spring Break. We were just sitting at a table in the sun on the beach with hookah, a cocktail, and just a bunch of people having a good time. The weather was gorgeous, I couldn't have asked for a better day. We went back and went to another place for the sunset, which was even better than the first place. The sunset was like a screen saver on a desktop. It was one of the most beautiful things I have ever seen. 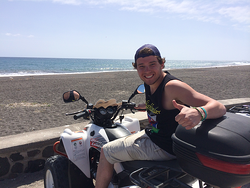 The next day, we rented ATV's and went quadding throughout the island! The quads went up to 60 mph and were amazing. I personally have never been quadding and it was an experience I will never forget. We originally just went around town and then ended up at an amazing beach where we were able to go swimming and just relax on the warm sand.

My entire spring break was the best spring break I have ever had. We got back to Florence on Sunday, and I have classes all this week. Then this upcoming weekend, I will be going to a Fiorentina vs. Udinese soccer game through my study abroad program. I can't wait to go to the game, but then the week after that I am going with another roommate to Ibiza, Spain for Tripbiza!