These past two weeks have been unbelievable. The weekend of the 22nd of February, I had an Orientation trip to Assisi, Perugia, Siena & San Gimignano.

We left Friday morning and first hit Assisi. Assisi was unlike any other city I have seen. There was a lot of history surrounding the city, especially around the Basilica of San Francesco d'Assisi. The basilica was built right after St. Francis' canonization in 1228. The basilica was beautiful and so was everything around it. 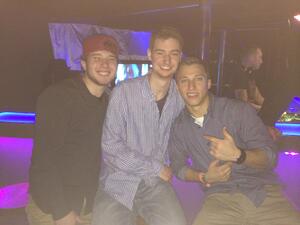 After Assisi, we drove to Perugia, where we had a little tour and then went to our hotel which was just 5 minutes away. The hotel was a lot of fun, especially since it had a giant pool in the basement, so as you can guess, I was there just about all night. The best part of the hotel was around 11 o'clock at night, when me and two other friends got really hungry and asked the concierge where the nearest place to eat was. He told us to walk about ten minutes down the street and there should be a pub there on the left. So we went to the pub and walked into a giant soccer supporter group. The Perugia soccer team was playing at the time and there was a giant supporter group going crazy over the game. As you can guess, me and my two friends joined the supporter group and ended up getting the Perugia supporter scarf to wear around. It was definitely one experience I will never forget.

The next weekend was the best trip I have had since being here.

Wednesday night, me and my roommate made the spontaneous decision to go to Prague, Czech Republic for the weekend. The only thing I can say that was terrible about the trip was the 12 hour bus ride. The bus ride was miserable, but after everything I got to see and do, it was completely worth it. We left for Prague Thursday night around 8 o'clock, and arrived around 8:30 Friday morning. Right after arriving, we put our bags in our hotel rooms and went on a tour around Prague. The city was beautiful, we got to see so many famous cultural attractions including the Prague Castle, the Charles Bridge, Old Town Square, and the Lennon Wall.

My favorite attraction was the LennonWall. The Lennon Wall is a wall filled with John Lennon-inspired graffiti. The colors and creativeness of the wall was an inspiration. It is definitely on my list of most inspiring pieces of "art work" I have seen.

Following the tour, we went back and finally got our nap in. We woke up around 8 pm and went on the famous pub crawl. The pub crawl included free entry into 3 bars and free entry into the club of our choice. Friday's pub crawl was unbelievable. Me and my roommate didn't know anyone going on the trip and by the end of the night basically knew every single person. Friday night was one of the best nights I've had until Saturday night happened.

Saturday night, we did a different pub crawl that included free entry into 3 bars again and then free entry into Prague's famous 5-story club, Karlovy Lazn. Karlovy Lazn is the largest club in central Europe and features 5 different clubs within one building. The first level contains a bar, sofas, and a balcony where you can look outside. The second level is an electronic dance music club, where I spent most of my night. The third level was the most interesting level. The third level was called the "Oldies Level." This level consisted of a dance floor lighting up in a bunch of bright colors with music from the 70's and 80's playing all night. Mostly everyone went to this floor and would sing along with all the great classic songs they played. The fourth level played mostly techno music and the last level was the Chill Out Room, where people danced in laser cages.

Overall, it was purely awesome. Sunday, we left early in the morning and got back around 10 o'clock that night where I fell asleep within 5 minutes of being back. Prague was the most amazing place I have visited and I would definitely recommend going there if anyone gets the opportunity to.

This week, I will be in class until Thursday. The classes are great and I am learning a lot. My favorite class so far would definitely be my Contemporary Mafia and Antimafia class. It is unbelievable how much the mafia controls throughout Italy. It is almost as if the mafia runs Italy. However, this week is going to be hard to get through since all I can think about is next weekend where I will be traveling to Barcelona, Spain for their annual Abroadfest. I will be leaving Friday morning and arriving in Barcelona in the afternoon. Abroadfest is a 3-day concert going on which I will be seeing on Friday and Saturday, since I will be missing Thursday's. I can't wait to experience Barcelona and look forward to sharing all the great experiences I will be having.