Have you ever Googled the term “generation”?  If you do, you will get millions of websites.  Some of them point to how this term is defined while a lot of them talk about generational differences.

There are some interesting things to consider upon clicking on the links.  First is that, if you examine the sites that define “generation,” you are likely to find a unique definition on each page.  In other words, there is no consensus regarding how the term is defined.  Is it merely an age group?  Is it something else?

This lack of clarity in defining “generation” is problematic.  Popular press publications, blogs, “news” media, and peoples’ daily conversations often attempt to define generations by some broad categories based around age groupings.  You may have heard some of these terms: Millennials (also known as Generation Y), Generation X and Baby Boomers.  Again, though, these categories are somewhat problematic.  If there is a question on whether or not age groupings are an appropriate way to define the term “generation,” why use generational designations based on age in our daily discussions? 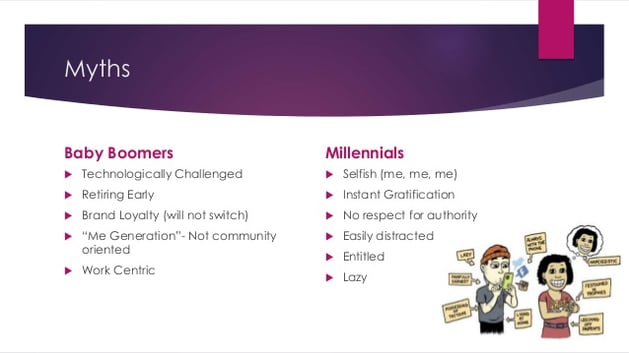 What is even more problematic is that sometimes these (often seemingly arbitrary) age groupings are used by people in the workplace.  It seems that once a label is placed on someone in the workplace (such as Millennial or Baby Boomer for example), expectations are set regarding what that person values, how they act and who that person is.

Each of these generational groupings has stereotypes (both positive and negative) associated with it.  On the negative side, consider for example someone who is labeled as a Millennial.  Sometimes individuals with this label are stigmatized to be inexperienced or entitled.  On the positive side, sometimes individuals with this label are believed to be good with technology.

From a personal perspective, earlier in my career I was always one of the youngest employees at several roles in which I found myself.  I believe that, because I was young, I was always assigned to tasks that were related to using or implementing some form of technology.  However, my managers never seemed to care that, in actuality, I was terrible with technology.  Instead, they seemed to use age-based stereotypes to assign particular tasks and doing so probably meant that the organizations I worked for weren’t operating as effectively as they might have if they would have assigned a more technologically-proficient employee. 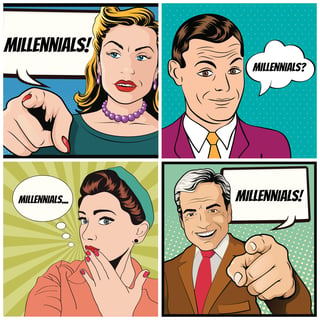 As illustrated in this example, the reliance on generational stereotypes led to making ineffective human resources-related decisions such as assigning tasks to employees.  However, the reliance on generational stereotypes also leads to conflict.  I have spent close to the past decade studying such intergenerational conflict and interactions in the workplace.  Much of the time, people who work together have difficult interactions or experience conflict because they perceive individuals that they label to be of other generations to be completely different from themselves.  They rely on stereotypical generational descriptions that emphasize the differences between age groups.  However, academic research (not often acknowledged by many media outlets) has shown that these differences have been greatly exaggerated (see Costanza, Badger, Fraser, Severt & Gade, 2012 and Parry & Urwin, 2011 for some top-notch research that suggests that differences may not be as clear as the popular press makes them).

So, what’s my point?  I work a lot with undergraduate students who are about to enter the workplace.  Sometimes employers give them a bad rap because they’re younger.  Yet, I see great hope in these students.  I truly do believe they can change the world positively if given the chance.  Similarly, in consulting roles I work with a lot of more mature employees who often ask me how they can interact more effectively with other younger colleagues.  They, too, have been labeled negatively because of age by their younger co-workers yet will continue to make valuable contributions to work and society if treated with the respect and dignity they deserve.

In our work, my research team and I have identified specific strategies to help resolve intergenerational conflict (for example in Urick, Hollensbe, Masterson, & Lyons, 2016).  I’d be happy to share some of this research with you if you’re interested – send me an email and let me know.  While the research goes in depth into the causes of and ways to manage intergenerational conflict, the details all relate to one thing: treat others as fellow humans.  Forget about their age.  Look at that other person as an individual.  Get to know who they are rather than focus on stereotypes.  This, by the way, also goes for other stereotypes and perceptions of differences that are not age-related.  It sounds simple but, in the workplace and society, treating others as unique individuals with their own personal strengths, weaknesses, emotions, worries and personalities is unfortunately not always done.

So, what do you think?  I’d love to hear your opinion!  Do you think the categories of generations are useful?  Have you ever experienced intergenerational conflict?  If so, what caused it and how did you resolve it?  Email me at michael.urick@stvincent.edu or get in touch with me through Facebook (www.facebook.com/urickmj) and LinkedIn (www.linkedin.com/pub/michael-urick/a3/775/5b/).  Of course you can also post your thoughts in the comments below.