Why Blue Jays play with their food.

I just resubmitted an article to a peer-reviewed journal. As I mentioned in one of my first blog posts, my former student Dakota Hutchinson, C’14, and I took his senior thesis in Biology and converted it into manuscript form. We sent it to the editor of a national journal that publishes undergraduate work, and she sent the paper to two anonymous reviewers. The reviews came in, and over the last month, Dakota has done most of the work responding to the criticisms and suggestions of the reviewers.

I took a look at Dakota’s revisions, made a few revisions of my own, and sent the 22-page manuscript back to the editor today. I expect she will accept the changes we made and then forward it to the publisher. There are lots of details here I am skipping over because I want to share with you what our research was about.

Dakota studied “anting” behavior. I will let our article’s abstract speak for itself:

“Anting is a curious behavior that has been recorded in over 200 species of songbirds. While anting, a bird will wipe several ants throughout its plumage. It has been proposed that birds select ants for their ability to spray formic acid, a chemical that is known to have antibacterial properties at high enough concentrations that may help to limit the growth of feather bacteria….”

As you will see, scientific papers follow a standard format that orders sentences in a logical pattern, and every word is chosen carefully. Are you following so far? Dakota has taken an interesting behavior and tried to explain its purpose. When birds “ant,” they use their beak to pick up a live ant and comb through their feathers with its tiny, wriggling body. I suspect this is not something that you or I would do by choice. However, we humans can keep ourselves clean by rubbing soap on our body surfaces with our hands. Birds don’t have access to soap, and their beaks are not as effective as hands would be for cleaning their bodies.

The idea, therefore, is that birds find ants that have a chemical on them that can aid feather and skin health. Feathers have harmful bacteria growing on them, just as you and I have bacteria growing all over our skin. Many of you probably said “yuck” when I said that, but you know it’s true.

Once again, I am skipping some details here. Not all bacteria are bad, and birds have other defenses against the bad ones. Moving on, how did Dakota test the idea that ants were being used as antibacterial agents? The article abstract continues: 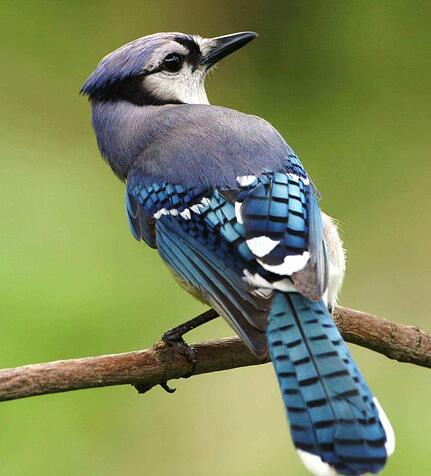 This one sentence describes work that literally required about 100 hours to accomplish. It took us around 25 hours to catch two blue jays (they were usually smart enough to avoid our traps), another 58 hours to care for the birds over a period of 4 weeks, and another bunch of hours for Dakota to collect the ants he needed to give the birds.

Dakota provided two types of ants to the blue jays to see which one they would use the most. One type of ant had the chemical we think has antibacterial properties, and the other type of ant did not have the chemical.

“… After 26 daily sessions, it was found that a significantly higher percentage of Black carpenter ants were used for anting when compared to the percentage of Western harvester ants….”

That word “significantly” has a specific meaning. The word is only used in scientific literature if a statistical test shows that the pattern stands out from what would be produced by randomness. For example, if you flip a coin 100 times, will you get exactly 50 heads and 50 tails? Not likely, because there is some randomness to a coin flip. You might even get 60 heads and 40 tails and there may be nothing unusual about the coin.

But what if you got 89 heads and 11 tails? Something else is probably going on, and a statistical test would indicate how unusual that result was. This 89-to-11 pattern is what Dakota found for the jays; the birds chose the ants possessing the chemical far more often than not, and this result was well beyond what would be expected by chance alone.

Some student projects would have ended at this point. However, Dakota knew that there was more to do. He demonstrated that the birds chose one type of ant over another, and the chosen ant is the one with the antibacterial chemical. However, science has to methodically, obsessively-compulsively, ensure that each assumption we make is a good one. To this point, Dakota had not shown that the birds’ choice had anything to do with the antibacterial chemical. So he continued on:

“… In the second part of the study, feathers inoculated with the common feather bacterium Bacillus licheniformis were treated with black carpenter ants to determine if the formic acid contained within these ants was at a high enough concentration to inhibit bacterial growth….”

Once again, we have a sentence that represents many hours of laboratory work. Now Dakota had to grow bacteria on feathers and treat them with the ant species chosen by the birds (see photo with feathers taped to inside of a glass beaker). Later, he had to transfer any bacteria still growing on the feathers to Petri dishes where he could count the number of bacterial colonies (see photo).

Keep in mind that bacteria are invisible to the naked eye, so all of this was done with faith. There was no way to know if the techniques being used were effective until the end of the experiment. Here's what happened:

There you have it. The ant chemical applied to feathers by a human named Dakota did not result in any reduction in bacterial growth. When scientists get a result like this it is often hard to interpret. Finding no difference in bacterial counts may mean that the ant chemical had no effect. But that assumes the techniques we used were working the way we intended, and we can’t be sure of that without further research.

On the other hand, maybe the ant chemical did have some effect, but it was very small and could not be statistically separated from a random pattern. A larger number of test feathers could help with that, but again, we would have to repeat the experiment to know for sure. Dakota used 24 feathers. That was probably enough, so I am confident that there really wasn’t any effect of the ant chemical on bacteria growth.

However, were we successful in transferring enough ant chemical onto the feathers? Were we considering the most meaningful type of bacteria (maybe another type would have been killed by the chemical)? Or maybe the ant chemical benefits the birds in other ways that we did not consider, for example, maybe it kills fleas.