As I mentioned in previous posts, music is a big passion in my life and I often try to look for linkages between music and my academic interests related to organizational behavior – including leadership studies.

Recently, I had the privilege to go see Kenny Rogers (for those who don’t know, he’s a famous country musician with several hits in the ’70s and ‘80s) at the Palace Theatre in nearby Greensburg. The Westmoreland Cultural Trust, that presented this show, always puts on great events but this one was exceptionally meaningful to me. Roger’s song “The Gambler” (1978; written by Don Schlitz) has been my favorite karaoke song for at least a decade, but the lyrics also speak to useful tips for leaders.

Of course, Rogers (and Schlitz) are talking about playing cards within the context of the song, but they might as well also be referring to the need for leaders to understand their environments. When making decisions that impact a variety of stakeholders including employees, customers, communities, suppliers, competitors and society as a whole, organizational leaders need to know when to exert their influence and when not to (and what types of initiatives on which they should exert their influence). They need to understand what it means to make tough decisions that respect employees’ dignity, provide value to customers, treat suppliers well and provide needed products to improve society all while maintaining competitiveness in a dynamic industry. Leaders need to know what appropriate decisions are and how to advance the agendas that will improve the lives of others by reading their environment well; in essence knowing when to “hold, fold, walk away or run.” Just as card players need to read their surroundings and the other players well, organizational leaders need to understand their contexts.


Yet, understanding context can be tough for leaders. Consider the life of another famous musician: Glenn Miller. Miller was a famous big band leader and jazz musician from the 1930s and ’40s (for more information on Miller’s leadership, please see below for information about the chapter written by Dr. Therese Sprinkle and me in 2014). He failed miserably when he put together his first band because he didn’t understand the context of the music industry and society, more generally, of the time. 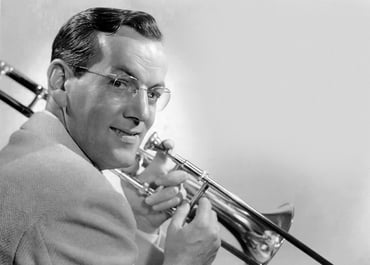 However, over time, Glenn Miller grew to understand his personal strengths (he was a great organizer) and weaknesses (he was not as good of a trombone player as others) as well as the opportunities (most other bands focused on soloists rather than instrument sections playing in harmony and thus his competitors did not create “hummable” melodies) and threats (a lot of uncertainty within the context of the U.S. culture) of his context. Once he understood his context, he created and led a band that focused less on individual soloists, but more on a group of saxophonists and clarinetists playing harmoniously. Many of his songs focused a lot on Americana and ultimately set the tone for his national culture at the time.

And was he effective? YouTube “Glenn Miller” when you have time. I would be surprised if you don’t recognize at least one of his band’s songs (likely more than 70 years after it was first recorded). Miller also earned a lifetime Grammy about 40 years after his disappearance (the plane carrying Glenn Miller on his fated flight over the English Channel was never found). And his band continues to perform to this day (albeit without Miller) – in fact, the Westmoreland Cultural Trust just brought them to the Palace several months back as well!

Leadership experts have anecdotally remarked that the true sign of a good leader is that her or his organization will continue to function well without them. Miller’s band functioned the day after his disappearance and continues to function effectively to this day. In part, the Glenn Miller Orchestra functions because Miller built an effective organization because he was able to understand his context.

Although he never heard “The Gambler,” I’ll bet Glenn Miller would have loved Kenny Rogers’ song. It’s a song, and advice learned by Miller, that many organizational leaders could take to heart. As I mentioned, music is important to me on so many levels. I have looked to Miller (and Rogers) to inform my own academic interests as well as the leadership roles I have found myself in, including leading my own jazz band that plays some of Glenn Miller’s songs.

So, what do you think? Do the lyrics to “The Gambler” inspire you? How important is context to you in your leadership roles?  Do you agree that Miller was effective because of his understanding of context? Have you found inspiration in any other lyrics, musicians or other areas of pop culture? I’m always excited to hear your thoughts: please write your comments below, email me at michael.urick@stvincent.edu or find me on LinkedIn and Facebook. I hope to hear from you soon.

In the meantime, Merry Christmas, Happy New Year and Happy Holidays! I wish the best for you and your families this holiday season!