It is finally spring! Like everyone else, I have been waiting and waiting for the cold temperatures of winter to break and the sun to come out. Spring weather means I can go for a run or bike ride… which I will do later today. The warmer temperatures have also allowed me to work on another planned sabbatical project that was on hold until recently.

“Sure, Jim, we’d be happy to have you,” said Dr. Luke DeGroote at Powdermill Nature Reserve, a 2,200 acre research and education facility operated by the Carnegie Museum of Natural History. Powdermill is in the Laurel Highlands and about 30 minutes from Saint Vincent’s campus. I had asked Luke if I could come out to Powdermill for several days to brush up on my mist-netting skills. He suggested coming out on mornings in March, when the temperature was above freezing. It turned out that very few mornings in March were that warm, so I am continuing to go to Powdermill several mornings per week even though it is April.

Mist netting is a technique for catching wild birds. The nets are made of black nylon thread and are suspended vertically between two poles, similar to the way a volleyball net is hung. The nets are placed close to shrubs and trees so that when a bird attempts to fly from one side or the other, it flies into the net and becomes tangled in the fine threads.  Why wouldn’t a bird see the net and simply fly around or over it? Often, that is exactly what they do. Luke and I saw a pair of Eastern Bluebirds perching on the mist net pole this past week, flying over a net repeatedly and never getting caught. Sometimes, though, ornithologists are able to place the net in a spot where there isn’t a lot of distance for a bird to see the net from too far ahead, and the netting is so fine that it is difficult to see. I think that is why the nets are called mist nets: they are fine as the mist. 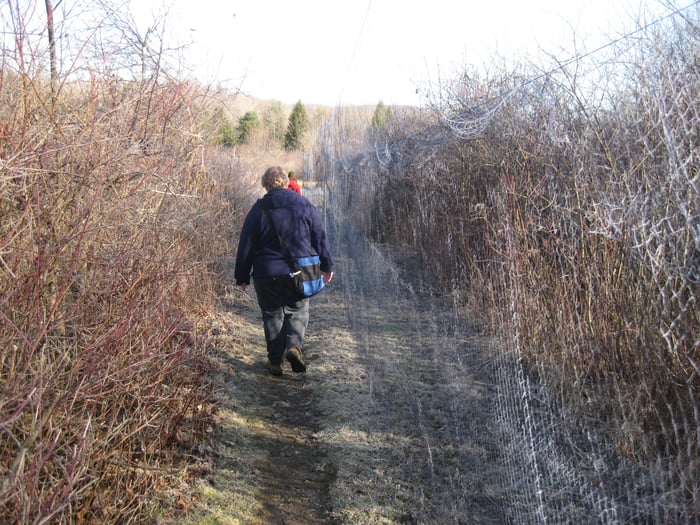 Ironically, though, if we have actual mist in the morning, water droplets form on the net and it becomes easily visible to passing birds. We had that problem on several mornings this past week (see above). We had to wait for the moisture to dry before any birds would be caught, but in the meantime I still appreciated the situation because the mist on the nets made them look like giant, beautiful spider webs holding dew. If the weather is particularly sunny or windy, the nets are also easy to see, so most birds are caught by mist nets on partly cloudy, mild, and calm days.

I called Luke because I wanted to refresh my mist netting skills, because I haven’t done any mist netting in more than a decade. I usually capture wild birds in traps baited with bird seed, and this has been sufficient for educational demonstrations and student research projects. However, my Ornithology students really should see how mist netting is done because the technique is widely used by ornithologists. Relatively few bird species are attracted to bird seed, so mist netting provides much better data on the diversity of birds found at a study site.

The capture and banding of wild birds—no matter what technique is being used—is regulated by the government. I have to maintain both state and federal permits to do the work, and I am required to submit my data to the federal bird banding lab (BBL) every year. I bet you didn’t even know there was such a thing! Well, there is. Because birds travel across state lines, it is important to have a national database of banded birds so that if I catch a bird that already has a band, I can look it up and determine where it came from. Thus, we need a bird banding lab to collect and house the data.

We also need a federal bird banding lab to ensure that only people with sufficient training can obtain the bands and the equipment needed to mist net birds. Most birds are federally protected by law, and if birds are captured by people without enough training, there is a risk that the birds could be harmed or killed, even if such harm is unintentional. I have several permits that allow me to catch and band birds, but I am not presently allowed to use mist nets by myself (I can’t even buy a mist net without a permit). That is why I am working at Powdermill this month to gain enough skill at the technique that I can obtain the needed permits.

The staff at Powdermill has operated a network of mist nets nearly every day since 1961. It is the longest-running bird-banding program in the country. Birds are caught in nets, identified, banded with a uniquely numbered metal leg band, examined and measured, and then released. The process is relatively harmless and takes less than 5 minutes per bird. In the photo above showing a female Northern Cardinal in hand, you can see the small metal band applied to its leg (bottom-right corner of photo). After banding hundreds of thousands of birds (just at Powdermill), the scientific value of the data collected is significant. When records from Powdermill are combined with the records of other banding stations located throughout North America, researchers can now determine:

Indeed, all of the things above vary by species, so there is never just one answer to an ornithology question; it depends on what species you are asking about. Some things, you may never have thought to even ask about. Someone needs to know the answers when we finally think of some questions. That’s what science is all about.

There is a whole science related to bird banding, but there is more to the experience than just doing the science and collecting data. In my next blog post I will take you through a day of mist netting so you can see how it is done and what I am thinking about as the weather warms and I rejoice in seeing more signs of spring.