I Called it Woodpecker Underwear 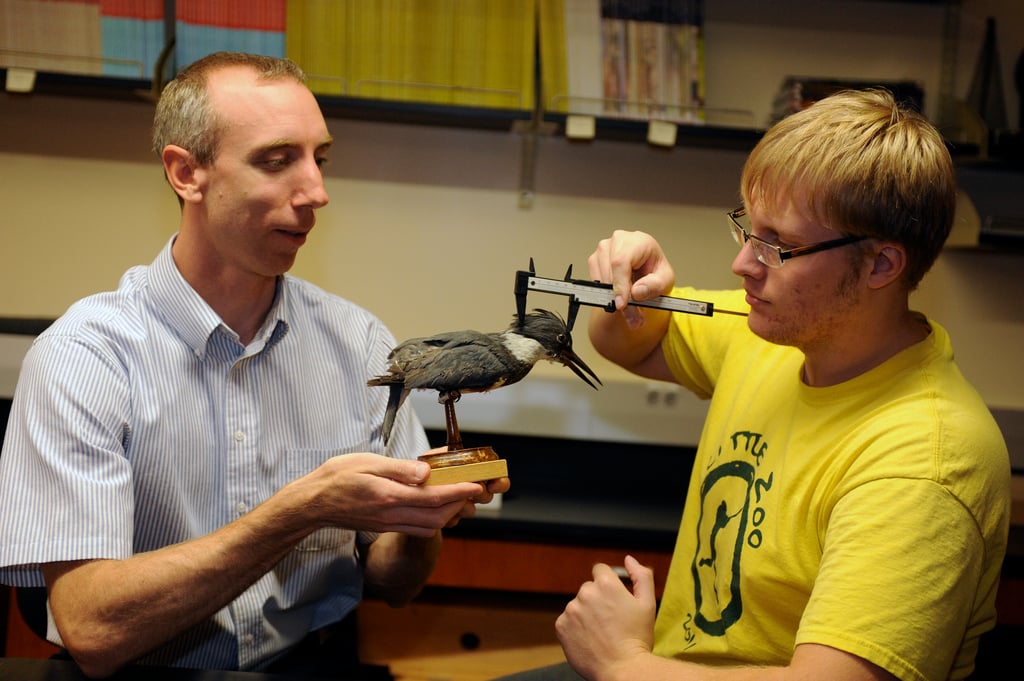 I really like the first week of classes because the energy and excitement is high among the students. What interesting things will we learn? What exciting things will we do? I am on sabbatical this semester, so I am not getting questions like that from students, but the questions are still worth asking of myself. I will surely learn a lot during these months, and there will be plenty of excitement. So far though, I’ve simply been staring at a computer screen and just beginning to formulate a strategy for finishing my paper on Downy Woodpecker home range size.

That’s right. I am about to write a paper about the amount of acreage individual woodpeckers use as they go about their lives finding food, finding mates and playing musical instruments. (I have no evidence for the latter, but who’s really to know? Not many people study these birds.)

I have a dataset of 67 individual Downy Woodpeckers which I captured, banded and released between 1999 and 2002. Each woodpecker was given plastic, colored leg bands for identification purposes, as well as a radio transmitter that made finding each bird again relatively easy. The transmitter itself was the size of a fingernail and it sat on the back side of the bird.

I don’t have a good photo of this setup on a woodpecker, so I have inserted a photo of an American Crow wearing a transmitter as part of a separate research project I was working on from 2006 to 2007. The placement of the transmitter on a crow was a bit different from what I used on the woodpeckers. For the crows, the transmitter was looped around the wings and worn as a backpack. For the woodpeckers, it was attached using elastic thread looped around the bird’s legs at the hips. I would joke about providing woodpeckers with underwear (i.e., something worn around the hips with elastic), but I think most people laughed at this only to be polite.

Once released, a bird wearing a transmitter would be free to go about its business and I could track its movements through the forest. Most woodpeckers can be found in the same patch of woods each day, and this geographic area is called its “home range.” The home range size of an animal will depend on its needs for obtaining food, water, shelter and mates; these things in turn, depend on the physical size of the animal and environmental conditions.

For example, a larger animal will require more food than a smaller animal, so the large animal has to range over a greater area to find enough nutrients to sustain itself. Food supply depends on the season, on weather, and on the number of other animals relying on the same food items, so home ranges may change in size or position as the seasons change or as competing animals come and go. My research paper will address some of these ideas.

Specifically, I think woodpecker home range sizes should be larger in the cold seasons (fall, winter) than the warm seasons (spring, summer) due to presumed food scarcity in fall and winter. Woodpeckers eat a lot of bugs, which are less active in winter. Woodpeckers do not eat stink bugs, so don’t bother asking.

Apart from season-based changes in home range size, I am also interested in whether or not the home range sizes are dependent on the number of other woodpeckers found in the same forest. Is there competition for space or food? Also, could a woodpecker’s use of space depend on its interest in finding a mate? Maybe a male will start spending a lot more time in the part of the forest used by an attractive female.

Right now, my ideas are a little unfocused on what to do with the home range data. As mentioned, the dataset is more than 12 years old. It is left over from my Ph.D. work at Purdue University. I have published much of my dissertation already, but there are bits and pieces of data that I think are still valuable, even if they are old.

No one has published anything on Downy Woodpecker home ranges since 1993. I am still THE expert on this species, but as a scientist I have to make sure the value of my work is apparent, my hypotheses are sound, and my analyses are able to answer the questions posed.

Fortunately, I am not starting from scratch. I have an 8-page partially completed manuscript that I began writing soon after getting my Ph.D. I had to put it on hold while I searched for a permanent job (St. Vincent), and then it was put on hold again as I started teaching new courses and worked on other manuscripts. I start again now with this 8-page paper that was last modified on March 15, 2010. A lot of what I wrote is really good, but there are some ideas in there that don’t seem as good to me today as they did 5 years ago.

My first order of business has been to do some reading. No one has published anything on woodpecker home ranges in many years, but there are plenty of recent academic papers on the home ranges of other animals. I am reviewing these studies to see what other scientists have been thinking about, and what analysis techniques they have used. This is part of doing science. My own work must be based on that of others in my field. What a great opportunity I have to do all this reading and not feel rushed! I am going to learn a lot this month, and that is exciting enough.