This past Saturday we celebrated the Faith and Reason program's annual Epiphany Party.  We began with evening prayer with the monks, and then had a very festive meal together. 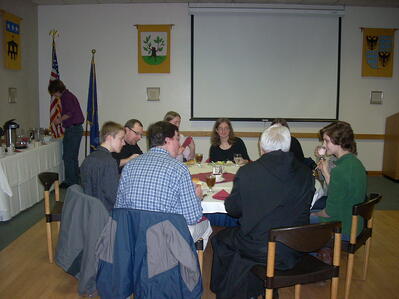 At the conclusion of dinner, we cut into the King cake, a traditional dessert eaten on Epiphany.

In our variation of this wonderful Catholic tradition, we put a pea and bean in two pieces of cake: whoever gets the pea is the queen, and whoever gets the bean is the king. The first official duty of our new royalty is to form a choir to sing "The 12 Days of Christmas."  It is said that one can learn a lot about the state of the kingdom from the royalty's first official act, and this year was no different: King Garret and Queen Ivanka, while not exercising total tyranny over us, certainly kept us in a state of fear! Their idea was to point at individual members of the choir and command them to sing. This led to much confusion, as they didn't know most of their subjects' names (yet another bad sign for the kingdom!), and foolishness abounded. I must say, though, that there were moments when things started to click, and this speaks much to the value of letting spontaneity momentarily reign!

After dinner we headed up to the theater in the science center, where we enjoyed Pope Francis's favorite movie, "Babette's Feast." As you can see from this photo taken before the film, the frivolity that our royalty inspired was hard to set aside! 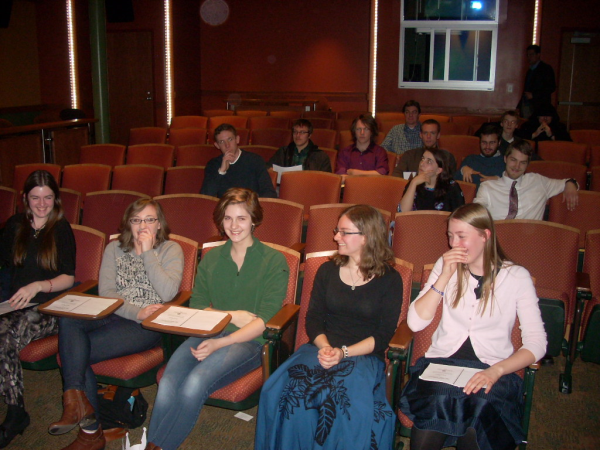 This is a challenging movie and it speaks so well to our students that they have the ability to appreciate it's subtle reflection on spiritual life.

We concluded with a nice discussion of the film, and I will end this post by pasting the email I sent to the participants:

It was great to see all of you last night and celebrate during this Christmas season.

As I mentioned last night, I will write a blog on our festivities and send you a link shortly.

In the meantime, here are some thoughts to follow up on our discussion of Babette's Feast:

1) the dish they were eating is called "caille en sarcophage," which means "quail in a tomb."  "Sarcophage" literally means "flesh-eater." What is the significance? My thought is that this is both reminiscent of resurrection, and thus points toward Easter, and that it symbolizes the Eucharist. I don't know why quail would be significant, but one thought is that in the Old Testament quails are associated with the manna from Heaven that the Israelites ate in the wilderness. Of course, this again connects them to the Eucharist because His body and blood are the true manna that give eternal life;

2) I was really intrigued by Bridget's question about who the betrayer is at the supper. I wouldn't want to push this too far, but consider the possibility that the deceased founder of their community is the betrayer: his failure to recognize the goodness of the body (when ruled by the soul) and his inability to recognize the sacramental significance of bodily activity in this life, leads to the dysfunctional nature of the community left after his death. His daughters are not allowed to marry, or pursue their artistic abilities; his disciples cannot settle old arguments, and constantly feel guilty about their sins. Babette, in a Christ-like role, is able to heal them through a meal that unites the bodily and the spiritual (as the General puts it).  This is the Catholic response to such a community: there are so many beautiful things here, but they miss the fullness of Christian life - they cannot celebrate! The founder is a betrayer of the fullness of the Gospel, that God took on flesh so as to redeem, not just our souls, but the body as well.

I should conclude by saying that you all rose to the challenge so well! Babette's Feast is one of the greatest films ever made (hey, Pope Francis said it is his favorite!) and requires much from the audience. It is not flashy, filled with action, or fast-paced; yet it is not plodding or boring: if you cultivate the leisure that Pieper mentions, this film can reveal much to you about who we are and how we are called to live out our salvation. Being able to appreciate this film speaks volumes to your maturity, and I decided to show it because I knew that you are the rare teenagers who are ready for such things...

Yours, in Christ,
Dr. Krom