In a previous blog, I discussed the problems of labeling generational groups. But, labeling in the workplace (and in society) goes beyond just generational categories and can be very problematic when individuals and groups rely on labels too much. The topic of labeling was not initially what I had anticipated writing for my blog this month (I was going to talk more about using primary research in the classroom but I will save that topic for later). However, given the prevalence of labels that I’ve noticed in some recent headlines and various social media postings, I was inspired to further address labeling here. 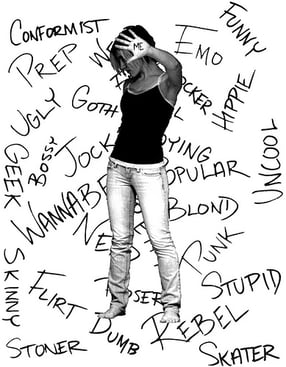 As noted a few months ago, much of my research has focused on the impact of labeling (often of generational categories discussed within U.S. society) and the perceptions that labels influence (see Urick, 2014, and Urick & Hollensbe, 2014, for how individuals negotiate their identities based on their perceptions of generational labels and Urick, Hollensbe, Masterson & Lyons, 2016, for how generational labels can lead to negative perceptions in the workplace). For the sake of this blog, I am using the term “label” to refer to a name, title or phrase used to describe someone that focuses on only a narrow aspect of self (for example a role like occupation, a belief system like religion, an affiliation like political party or a demographic characteristic like gender) so that the uniqueness of the individual is lost and the inherent complexity of the group to which the label is assigned is forgotten.

The action of labeling has had many negative outcomes in organizations (see Urick & Crandall, 2012, for an example of labels setting identities which, in turn, caused an initially disruptive conflict in a health care setting) and negative outcomes also occur at the societal level. For example, Rothman (1997) writes about “identity conflict” in which people fail to see the uniqueness of each individual but instead focus on prototypical traits (that are often inaccurate) of certain social groups when interacting with others and states that this occurs within organizations, families, teams and societies.

Humans tend to like order and predictability (even if we sometimes don’t admit it) and labels provide the illusion of knowing who another person is when we enter into interactions with them. The problem arises, though, when we remain focused on the label and fail to see the individual. Labels take out the uniqueness and intricacy of the individual that they attempt to describe. Discursive theory (see Baxter, 2011; Jorgensen & Phillips, 2002; and Potter & Wetherell, 1987, for excellent discussions on discourse analysis and language usage) would suggest that the words we use (such as labels) not only set expectations for traits and behaviors but also influence interactions and relationships so much that organizations may use such labels to impact their employment-related decisions, voters may be influenced by labels to elect a candidate despite not truly agreeing with his or her platform and news stories may focus on labels rather than individuals.

I am not the first to suggest that, rather than focus on labels that seek to isolate and divide, it would be better if we focused on labels that could unite under a common goal and universal identity (see Allport, 1954, for a classic discussion and Rothman, 1997, for more recent examples). I had the pleasure of playing with my band at the Hard Rock Café several times. Once, I saw a T-shirt in the store there that said “All is One.” I like that slogan because it highlights how each person is not just a label but that we experience struggles together. Rather than focus on differences, seeing each other as “one” will go a long way to uniting. That’s not to say, of course, that there aren’t differences inherent within each person but it does allow us to focus on a more cohesive identity while recognizing (and respecting) individuals’ uniqueness and perspectives.

Social identity theory, self-categorization theory and identity conflict studies suggest that labels can lead to divisions. This occurs in societies, organizations and smaller groups and can lead to stereotypes, stereotype threat, negative bias and discrimination. Labels also influence people to not see each other as they truly are: fellow humans.

So, what do you think? Do you agree that an overreliance on labels can be detrimental? Have you seen any negative effects of labeling personally? Interested to hear your thoughts! Email me at michael.urick@stvincent.edu or get in touch with me through Facebook (www.facebook.com/urickmj) and LinkedIn (www.linkedin.com/pub/michael-urick/a3/775/5b/).

Urick, M. J.  2014.  The presentation of self: Dramaturgical theory and generations in organizations.  Journal of Intergenerational Relationships, 12: 398-412.