A Summer Sky Full of Planets 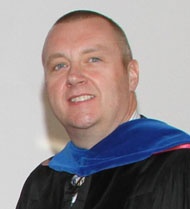 Three bright planets have graced the evening sky for the past month and will continue to do so throughout June and July. Jupiter, largest planet in the solar system, shines brightest in the southwestern sky just after sunset. Mars, slightly fainter but much redder than Jupiter, is rising in the southeast as the sun sets. Finally, 20 degrees (approximately two fists extended at arm’s length) further southeast Saturn appears white in comparison to Mars and the nearby bright star Antares – both red. Together, these three bright planets make excellent targets for small telescopes, binoculars or just stargazing with the unaided eye. Images of each planet taken with the College’s 14-inch telescope and planetary camera are shown above.

These three planets happen to be the three visible planets that orbit the sun at a greater distance than Earth – called the superior planets. A superior planet, every so often, will line up with the Earth and Sun. When this happens 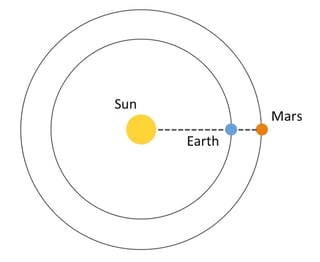 Both Mars and Saturn are at near opposition right now. Since Earth is close to these planets at the moment, they are at their brightest. If you view them through a telescope they are also at their largest apparent size. Because Mars is much closer to Earth compared to Saturn, its variation is more extreme. Thus, Mars is noticeably brighter than it normally appears. Over the next three months, Mars will fade gradually and become closer in brightness to Saturn.

In addition to viewing these planets in the summer night sky, a variety of spacecraft exploring these worlds offer close-ups no telescope on Earth could reproduce. Launched in 2011, the Juno spacecraft  will reach Jupiter on July 4. Unlike last summer’s Pluto flyby, when the New Horizon spacecraft sped by taking pictures for a few hours, Juno will orbit Jupiter for about two years. Juno will be only the second spacecraft to orbit Jupiter – the first, Galileo, ended its mission in 2003. Cassini, the only spacecraft to orbit Saturn, is nearing the end of its mission. July 1 will mark the 12th year Cassini has been taking images of Saturn, its rings and its moons. Next year, after nearly 20 years of service, Cassini will end its mission by plunging into Saturn’s atmosphere where it will be destroyed by the extreme temperature and pressure. On the surface of Mars, the Curiosity rover continues its exploration of Gusev crater. Orbiting the red planet, a veritable armada of spacecraft are monitoring the atmosphere, mapping the surface and laying the foundation for future exploration that will include humans.

Our ancestors watched the planets move through the sky for thousands of years. For slightly more than 500 years, telescopes have been able to reveal the cloud bands of Jupiter, rings of Saturn and the varying apparent size of Mars at it revolves around the Sun. However, for the first time this summer, spacecraft will be simultaneously sending back new images from Jupiter, Saturn and Mars. Supplementing this summer’s sky show of all three of the visible superior planets, we can also follow the scientific explorations of these incredible worlds.

Truly, we live in a unique and exciting era of exploration and scientific discovery!