Today, I had another morning of orientation at Hamilton House. This time Hanna was there to talk about the activities and trips we would be able to get involved in during our stay in London. CIEE is actually taking us on three different study tours. The first one is to York, England, and is at the end of this month. Then we are headed to Belfast in Northern Ireland in mid-March, and the last trip is to Cardiff, Wales, in April. These trips are planned and paid for by my program, so all I have to do is show up. I think it’s going to be a great way to see other parts of the United Kingdom other than London.

CIEE has other excursions available for its students to participate in as well. Every six weeks we enter into a new block. I’m staying for three blocks total, which means every six weeks I will be taking two different classes — one that relates to literature studies and another that relates to communication studies. During this time, CIEE has provided a list of activities for students to participate in outside of the classroom. These activities range from museum visits, walking tours, parades/cultural celebrations, musical performances, art galleries, sporting events and pretty much anything else you could possibly think of.

Also, while I’m here I have the opportunity to join clubs offered at University College London (UCL). There are plenty of clubs listed that range from feminist organizations, Harry Potter super-fan clubs, chess team and other political or artistic societies. I haven’t decided whether or not I’ll join any of the clubs, but I think it would be a good way to get to know British students and their interests.

Later in the evening, a group of us went back to the city of Westminster for more exploring and picture taking. We walked past Buckingham Palace and unfortunately no royal sightings yet again. The Queen’s flag was also not flying above the palace, which meant she was not staying at the palace. Most likely, she was probably at her favorite home in Scotland. We continued our walk through St. James’ Park where we found a lot of people like to relax and feed the ducks. Next, we did the most touristy thing we could possibly do — a group photo shoot in front of the cliché red telephone booth. If our accents weren’t a dead giveaway that we were Americans, this photo shoot was the tell-all signal that we were definitely not Londoners. But it was so much fun that I wouldn’t trade the experience for anything — no matter how silly we looked. 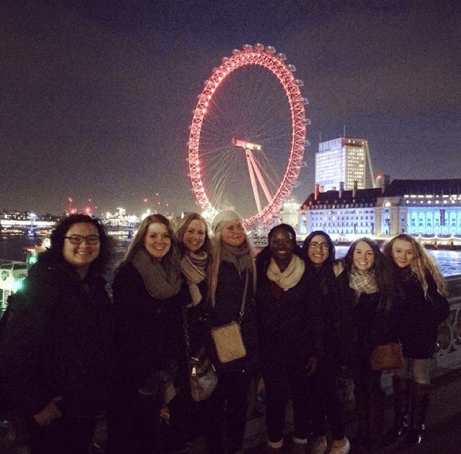 The London Eye with some new friends

We had also planned on going to the London Eye, but it was closed until the end of the month. Instead we found a British pub and restaurant to have dinner together. After dinner we ran into a protest in front of McDonalds. The protestors were dressed up as clowns and were chanting, holding signs and blocking the entrance to the fast-food restaurant. There were police standing nearby just in case anything got out of hand, but we figured it would be in our best interest to avoid the whole thing and head back to our accommodation.

That night, I went to bed a little anxious because the next day was going to be my first day of class — and I had no idea what to expect.

My first class began at 9 a.m. and was scheduled to end at noon. The course was titled, “Lions Led by Donkeys: British Social Dynamics During World War I.” I arrived at Hamilton House early and found the classroom, then anxiously waited for the lecturer to show up. Attendance is crucial in my program; if anyone arrives 15 minutes late, then the person is considered absent from class, and we are only allotted one unexcused skip. I don’t think this will be a problem for me considering I had 8:30 classes Monday thru Friday last semester, but I made the extra effort to be a little early.

The first impression I had about my lecturer was: “Thank goodness, she’s American.” She introduced herself as Kelly Spring and told us a little bit about herself. Kelly (she told the class we could address her by her first name) was originally from upstate New York, but has been studying in the UK for five years. At the moment, she is currently a student at Manchester where she is working toward earning her doctoral degree. She earned a master’s degree in history and specializes in examining rationing during World War I and World War II.

After a brief period of introductions and reviewing the syllabus, Kelly began her first lecture on the Edwardian Era. I found that this class was a good continuation of the Contemporary Europe course I took at Saint Vincent last semester and the material seemed very engaging and informative. At the end of the class, I had a really good feeling about this class and was looking forward to learning more over the next five weeks.

On a different note, this day was also a very sad day here in London. Many people both in the United Kingdom and United States are mourning the death of Alan Rickman, a British actor primarily known for his role as Professor Snape in the Harry Potter series. To pay tribute to his death, I visited Platform 9 ¾ in the Kings Cross St. Pancras Station. There were a few flowers, letters and other mementos leaning against the platform wall showing just how loved Alan Rickman was as an actor. He was undoubtedly an immense talent and will be greatly missed.