My last week in Europe was absolutely fantastic and I was even able to hang out with some fellow Bearcats!

My friend Rachel, who lives in Belfast with her family, invited me to stay at her house when she heard about my internship in London. My other friend Mary was visiting her the same week I was, which made the trip even more incredible. I booked a flight out of London that left at 7:30am, so I took the tube late at night with all of my luggage and slept overnight in Heathrow Airport to avoid paying an £80 taxi fare the next morning (the tube is closed from 11pm to 5:30am, so I would not have been able to make my flight the next morning if I did not stay overnight). It was totally worth it, since the US equivalent to the cab fare is $132!

Northern Ireland is definitely the most gorgeous place I have ever seen. I was amazed at how beautiful and green everything was. The first thing we did when I arrived was visit the Titanic museum in Belfast. The Titanic was built in Belfast and the residents like to joke that “it was built by Irishmen, but sunk by an Englishman.” We then ventured up to Portballintrae, a picturesque town by the coast, and spent a couple days there. Rachel says that this is her favorite place and it’s obvious to me why. Everything is so beautiful and calming there. We also saw the Giant’s Causeway while we were at the coast, which is a mound of 40,000 interlocking basalt columns, which were formed in the aftermath of an ancient volcanic eruption. According to legend, however, the causeway was built by an Irish giant named Finn MacCool so that he could cross the sea to Scotland, which you can see from the coastline. There are huge green hills that lead up to the causeway and make the beach scenery even more breathtaking. This was such an incredibly stunning place and I was awestruck by the beauty of it all. 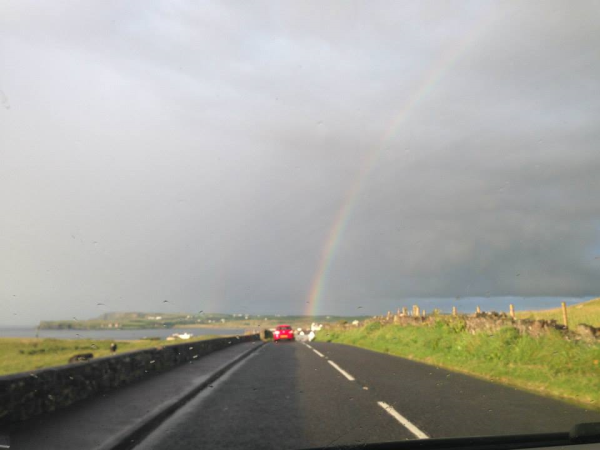 Rainbow while driving to Portballintrae 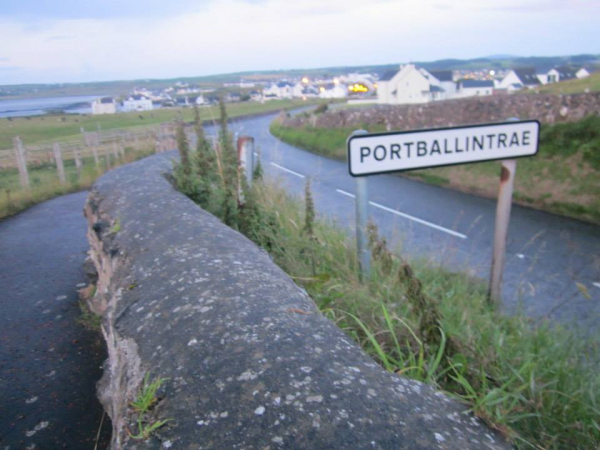 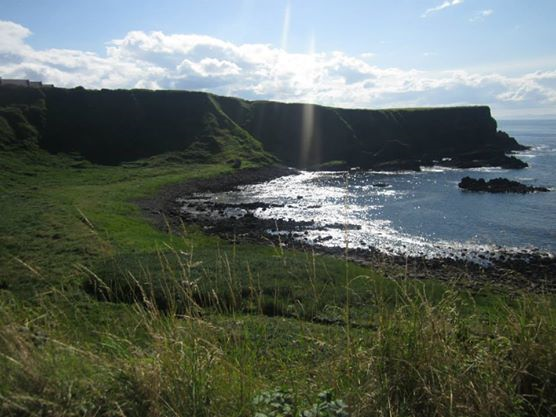 The path to the Giant's Causeway 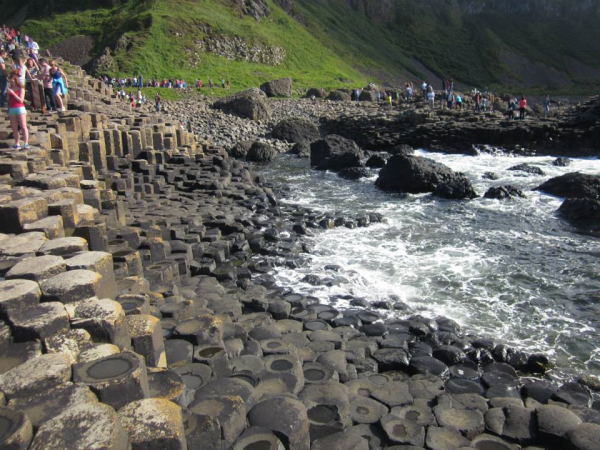 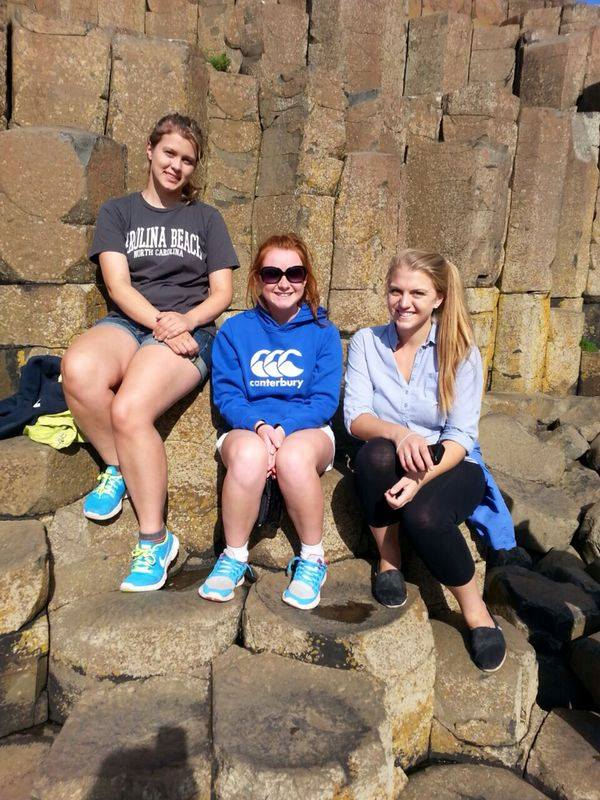 Mary, Rachel, and I at the Giant's Causeway

We also visited Derry, which is officially named Londonderry, and toured the historic city walls. These walls were used in battles many centuries ago and still remain standing today. We returned to Belfast the next day and took a bus tour around the city (which was very windy on the top of the bus!). One of the things that particularly surprised me was that the peace walls were still being used in the urban communities in Belfast and Derry. These walls were erected in 1969 to separate the Unionist and Nationalist communities during the outbreak of “The Troubles” in Northern Ireland. The separate neighborhoods still erect either the British or Irish flag to show their allegiance and the tension is still present, even though the fighting stopped many years ago. It was haunting to see the remnants of the past in the graffiti in both cities, but encouraging to see how the communities are learning to live with each other peacefully. We also visited a monument to honor the soldiers who died in WWI, which overlooks the entire city, and Queen's University, where Rachel studies. 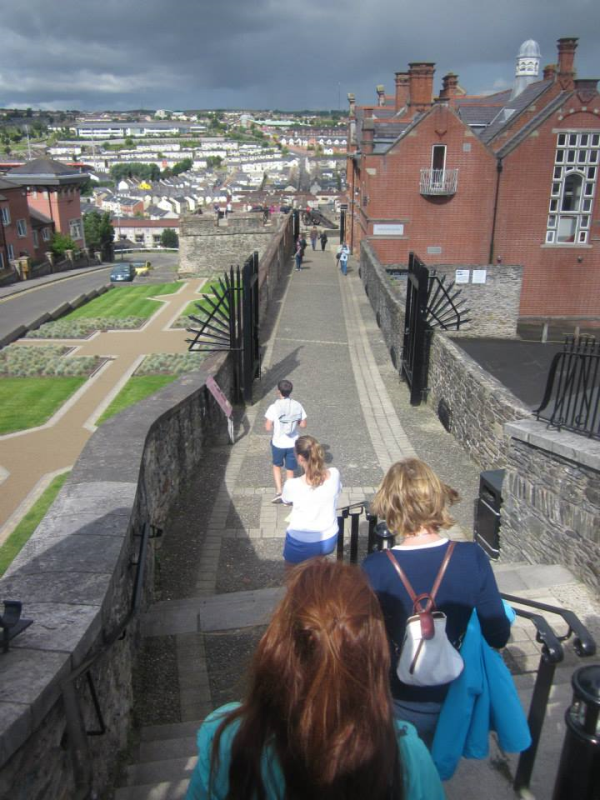 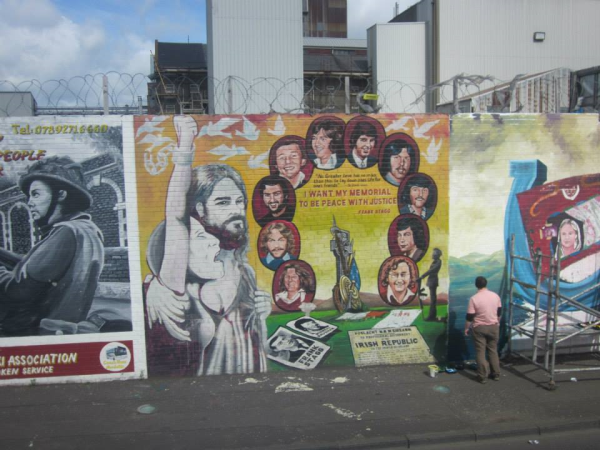 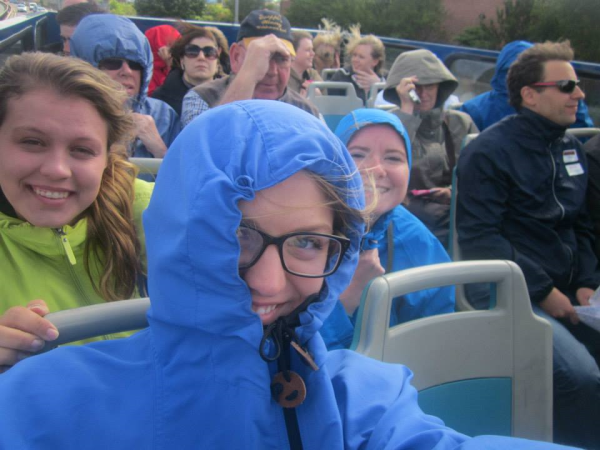 Mary, Rachel, and I on the windy bus tour

View from the WWI monument 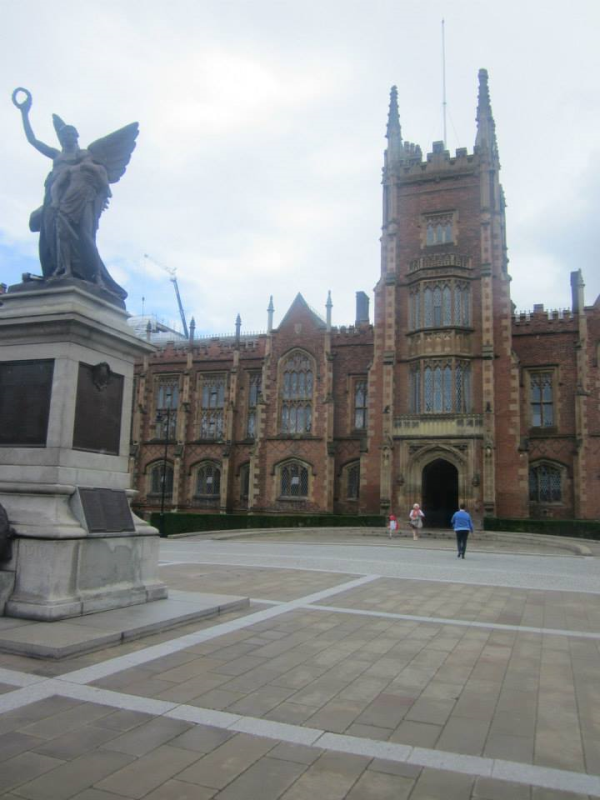 I have been back in America for a little over a week now and I can hardly believe that I had such an incredible summer. Looking back, I am shocked at how many things I was able to do and how many places I was able to go. I can happily say that I have absolutely no regrets about my experience abroad and I am so happy to have had this opportunity. I want to thank my family for all of their support throughout the past year, Sara Hart for helping me organize my amazing trip, and Rachel Macartney and her wonderful family for inviting me to stay with them. I am now about to start my senior year at Saint Vincent and I couldn’t be more excited! All of the opportunities that can be found at this amazing school have truly changed my life and, after seeing the world, I am so happy to call Saint Vincent my home. 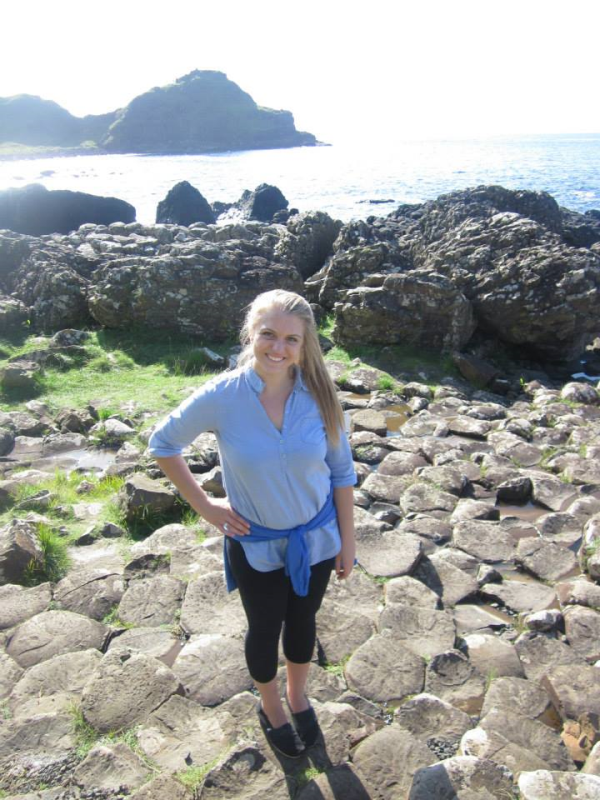