Living and Interning in the Land Down Under

It has now been about two months that I have been living amongst the kangaroos and koalas in the land down under, and it has been the most exciting two months of my life! This past month has been filled with learning how to surf, traveling to the Gold Coast and to Melbourne, and a lot of learning at my Australian internship.

At the end of March, myself as well as a group of 75 other study-abroad students got on a bus and traveled to Crescent Head, New South Wales, where we took part in a weekend filled with surfing! We spent all day Friday through Sunday learning how to surf in the beautiful Australian ocean. I was able to stand up on my very first try! We lived like true surfers for the weekend. We camped in teepees that were only a couple feet off the beach, and woke up at the crack of dawn in order to catch the best waves. 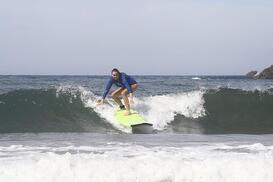 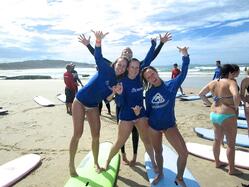 The next week was our Easter Break, also known as their Fall Break. We had an entire week off school so my roommate, another Saint Vincent Student (Sam Richardson) and I decided to travel the coast of Australia! Our first stop was Melbourne, which is in the southern state of Victoria. We stayed in a hostel for four days. This city was amazing but much colder than we were expecting; we even ate a place called Latrobe Cafe! Melbourne is known as the fashion capital of Australia and is famous for its architecture as well as its very intricate tram system. 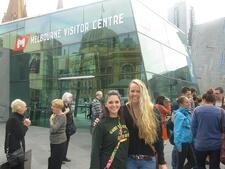 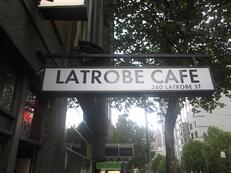 While in Melbourne, we explored the famous Great Ocean Road. We took a twelve hour tour hat showed us some of the most beautiful beaches in the world along the 150 mile road. Along this road is one of the seven wonders of Australia, The Twelve Apostles. They were once twelve rocks (there are only eight now due to some being washed away), which were carved out by thousands of years of battering by the Great Southern Ocean. Along the Great Ocean Road, you are also able to see the real London Bridge from the song! 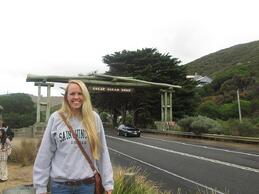 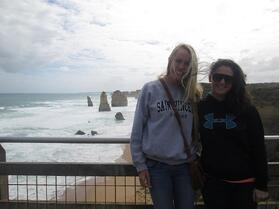 The next stop on our Easter Break adventure was the Gold Coast in Queensland, Australia. The Gold Coast is a surfer town known for its beaches and amusement parks. We spent our days in the Gold Coast lounging by the beach and exploring the markets of this beach town. The Gold Coast hosts some of the biggest surf competitions in Australia, everywhere you looked you could see someone holding a surf board!

Once we returned home from our week-long adventures exploring both and North and South Australia, it was time for me to return back to my internship. The web team and I have been working frantically because by the end of April, the first phase of the new University website will be going live. One job I had was to look through hundreds of images in a database called iStock to pick out five photos for the home page of the school's website that would appropriately represent each of the departments of the school. I have also had jobs such as going through the entire website and making sure that all the links work correctly and are tagged to open up to the right page. Working with a web team has allowed me to work closer with the CMS and other Adobe software programs such as Fireworks and Photoshop. My future jobs will include editing images and other design editing throughout the entire website.

I have learned so much in these past two months of my Australian internship, and I can't wait to see what else comes my way!