Afternoon tea and the Kensington Palace

My Friday consisted of a relaxing morning then an afternoon class. This time I had my communications course. It was called Music, Media and Public Spheres and my lecturer was no other than, Ray Casserly. I had some reservations about having him as a teacher considering he was also the director of our program and I wasn’t sure what to expect from him in a classroom setting; however, he proved to be a very lively instructor. Ray has a doctorate in music and cultural studies and even studied abroad in Pennsylvania at Lock Haven University (small world, right?) Ray also has plenty of musical experience. He has played in several bands and has studied the politics of music in relation to the riots in Belfast in Northern Ireland. The course material he presented on the first day was a little over my head. I don’t know much about the technical aspects of music, so I found it difficult to follow some of his arguments. I think the class might be really challenging for that reason, but I’m sure I’ll learn a lot from taking the course. And I’m excited to learn about new topics that are outside of my majors.

After class, Kenzie and I met up with two other girls in our program, Tori and Korrie, to plan our first trip outside of the United Kingdom. We all agreed that Paris, France, should be our first destination. So we researched trains, flights and bus trips and tried to find our cheapest, most efficient means of transportation. After hours of planning, we had a weekend picked, a flight booked and a hostel reservation all lined up. In a few days, I would be touring Paris! I can hardly wait!

Saturday morning was beautiful. The sun was out and it wasn’t as cold as it had been the rest of the week so it was the perfect morning to go on another adventure. I took the Tube from Kings Cross to Kensington Palace with the intention of spending the morning walking around a few of London’s parks, visiting the palace and making a quick stop at the notorious Notting Hill Bookstore.

The atmosphere at Kensington Gardens was very peaceful. The sun was shining through the trees, people were going on morning jogs (I wanted so badly to join them), parents were pushing their children in strollers and playing with them in parks and dogs were running around everywhere. There were so many dogs running around without leashes having the time of their lives. It reminded me how badly I missed my own dog and I wondered what he was doing back home where snowstorms were piling inches of snow on the ground. I continued my walk to Kensington Palace where I was greeted by a statue of Queen Victoria. I learned all about the Victorian Era in my Contemporary Europe class last semester so it was interesting seeing the actual spot where the history I learned about took place. The palace itself was a lot different than Buckingham Palace. Kensington, although it was well kept, still showed signs of aging — the tiles on the roof were moldy, the brick was dull and the framework was under construction. I stepped inside the palace entrance briefly, but decided I would come back for a tour when Princess Diana’s dresses were scheduled to be on display sometime in late March. 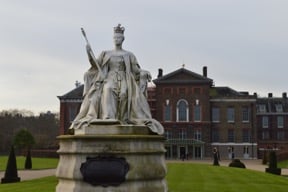 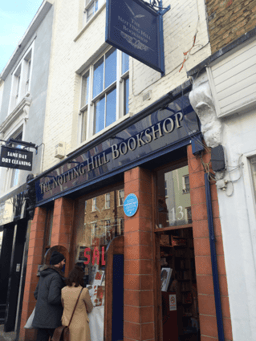 I continued to walk around Kensington just taking in the sights for another hour and then I started to make my way to the Notting Hill Bookstore. It was a little difficult to find, but Notting Hill was by far one of the cutest neighborhoods I had ever seen. There were so many unique townhouses and colorful markets — I could definitely see myself staying in an area like this since it was much less crowded than Kings Cross and a lot quieter. Once I finally made it to the bookstore it was everything I had pictured it would be except I clearly wasn’t Julia Roberts and the owner unfortunately looked nothing like Hugh Grant. I browsed the shelves of books and picked up a few classics by Jane Austen and Shakespeare.

Later in the afternoon, Kenzie, Korrie, Tori and I went to the Eccleston Square Hotel for afternoon tea. Korrie made reservations the day before. In case anyone is ever interested in having afternoon tea while in England be prepared to pay for the experience. Afternoon tea is not cheap, but it’s one of those things that you just have to experience. Our afternoon tea consisted of a choice of tea (I chose peppermint — excellent choice), a tray of sandwiches, cakes and biscuits, and a glass of champagne. I left the hotel with a full stomach and a feeling that I was officially a tea-loving, biscuit-eating Brit. 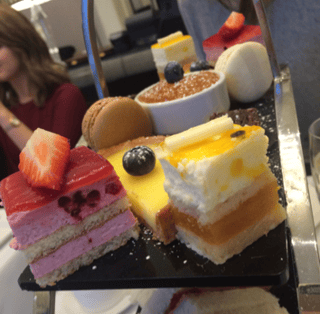