A Taste of Greece 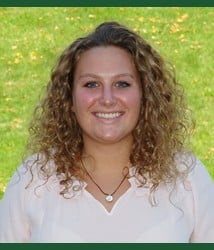 After a few weeks of finally settling into the city of history, culture, arts, nightlife, food and much more; Thessaloniki, Greece, has become my stay for these 37 days abroad. Choosing a city (the second largest in Greece), that is not too common among Americans for studying abroad, was a place I  knew was going to be very different. For example, dinnertime does not start until at least 9 p.m., businesses close from 3 to 5 p.m. for afternoon nap time, a large number of Greeks are avid smokers and the surprising appreciation from locals when attempting to speak Greek. The differences, however, have shown me that there is much excitement that can be found from being immersed in unfamiliar places. Places that hold so much learning and discovery.

Life in Greece is not like most countries in Europe. Here, everything moves at a slower pace (literally). Being on time for anything does not happen often. Whether it’s waiting for the bus to take you into town or to school, your professors strolling in 10 minutes late or ferry rides that are well past half an hour due departure, the Greeks are ones that appreciate their relaxed, cultured life that has been present for a great number of years. They also like their mid-day naps very much.

Despite this leisurely lifestyle, Thessaloniki boasts an immense amount of entertainment and events. Whether it’s strolling along the boardwalk and capturing the views of the Aegean Sea (pictured right), sipping a frappé (created by the Greeks) in the numerous coffee shops around town, shopping in the marketplaces, visiting the many museums and churches surrounding the city or checking out its well-known nightlife, Thessaloniki presents itself as a place for one to always keep busy, even in a laid-back lifestyle.

Part of experiencing Europe deals greatly with the food, which the Greeks excel at. Going to local, traditional restaurants around the city and to bakeries and gelato places have been a daily discovery here in Greece. Traditional meals like gyros, souvlaki, moussaka and Greek salads are among my favorite dishes. My second day in T 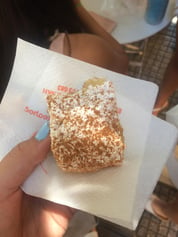 hessaloniki consisted of a food tour around the city, where I drank a hot Greek coffee and received a Greek fortune from the remnants in the cup. I tried the popular Greek breakfast treats of bougatsa (pictured right) and sesame bread rings at a bakery. I also toured the huge marketplace that sold fish, meats, cheeses, fruits, vegetables, olives, pastas and more. I even experienced a Greek cooking class, where I made Tzatziki (a dip for bread) and grape leaves. In addition to eating out in local restaurants, the Greeks will often give free desserts of either ice cream or Greek yogurt and fruit. Food is well-admired among the Greeks.

While seeing the city, tasting the food and attempting to live like a local have made my time so far in Greece very adventurous, I’ve learned that much more awaits when one studies abroad. One of the most important things I’ve learned thus far was from my theology professor, who has stressed the most important thing to take from being here is experience. It’s not enough to just read and see pictures and dream of things. Experience enables us to be immersed in places that give a deeper understanding and realization of others beyond our familiarity. Experiencing life is what makes all of us much more fulfilled in our own endeavors.