The Summer of A Touring Musician

Many people who know me as a professor and researcher are often surprised that I also lead and play music with a jazz/early rock/horn band called Neon Swing X-perience. Likewise, many people that know me as the vocalist and trumpet player for the band might also be surprised of my academic career. Yet, through many years I’ve tried to balance both roles and this summer was no exception. While I taught a summer class, helped to effectively recruit one of the largest classes our Master of Science in Management: Operational Excellence program has welcomed and worked on a half dozen research publications, I also found time to tour with the band. 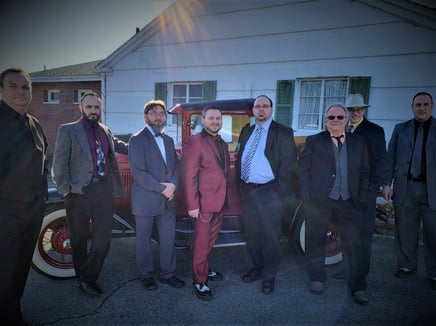 In fact, over the past several weeks we’ve performed shows all over the east coast including in Pennsylvania, West Virginia, Virginia, Maryland, Delaware, Kentucky, and Ohio in support of our 20th Anniversary album that we released in 2018. Touring life can be tough – especially the setting up and tearing down of equipment night after night and then driving to a new town early the next day. Playing the shows is the easy part! But, it’s a lot of fun and a great way to spend a summer vacation. Hanging out with some of my closest friends, meeting a lot of great people at shows and performing fun music is definitely not a bad way to spend some time.

And yet, when I began my career as an academic over a decade ago, I was hesitant to share a lot about my band with my colleagues and students. I wanted to be taken seriously as a researcher and teacher. Organizational behavior research suggests that there are different ways that people manage multiple roles that they hold (such as teacher, researcher and musician). Kreiner and colleagues (2009) suggests that people can choose to integrate their lives by finding commonalities and synergies between various roles. On the other hand, others choose to segment their lives by keeping their multiple roles separate so that they do not think, talk or engage in a different role while involved in their current role.

At first, I was clearly a segmenter, but I found myself to be quite burned out because I viewed my roles as dissimilar when, in fact, they were more beneficial to each other than I first realized. So, over the years I became more of an integrator by talking more about my musical side both to my students and my colleagues as well as taking lessons learned while on the road into the classroom and vice versa. I feel that I’ve benefitted in my academic career by doing so.

For example, as the band’s manager, I realized that I was engaging in a lot of the concepts that I teach in my management courses. Through seeing such organizational behavior concepts as motivation, satisfaction, citizenship behaviors, organizational culture,and many others play out regularly in the situations that the band encountered, I am able to provide some interesting firsthand examples to students in my classes. This does two things. First, it humanizes me as a professor by showing them one of my interests outside of the classroom. Second, hopefully it helps them relate to the material in a way that more traditional organizational examples cannot – and hopefully this allows them to imagine how the concepts we discuss in class might play out in their own everyday occurrences that they experience.

Beyond this, I believe that playing music in my band has also made me a better lecturer. Admittedly, part of teaching is performing. As a professor, I obviously need to communicate accurate material and I need to do so in a way that is fun and engaging to students so that they will learn and remember the concepts that we discuss. Through interacting with audiences with my band, I feel like I am continuously becoming better able to do this in the classroom.

So, how has your summer been going? Have you experienced anything during a “vacation” that you can use in your primary work role? Do you view yourself to be more of a segmenter or integrator? I am excited to hear your thoughts! Give me an email at michael.urick@stvincent.edu and connect with me on Facebook (https://www.facebook.com/urickmj/) and LinkedIn (https://www.linkedin.com/in/michael-urick-05b775a3/). Please also leave a comment below!